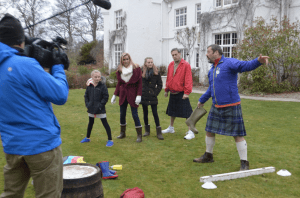 A trip to Scotland isn’t complete without playing some traditional Highland Games! Although these games don’t traditionally happen until the summer, Boots n Paddles kindly showed us the ropes of this iconic activity. Throwing shot put, tossing the caber, and chucking the wellie were some of the games that Colleen and her family got to try out. 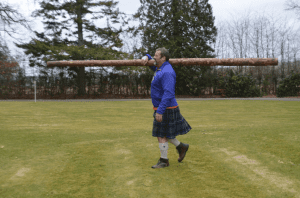 It is said that these games began in Ireland around 2000 B.C. and made their way into Scotland with the fourth and fifth century Scotti migrants. Traditionally, the Highland Games are played to test one’s strength, agility, and speed. With activities such as piping, dancing, and heavy athletics, the Highland Games have become a great way to celebrate Scottish culture and community. 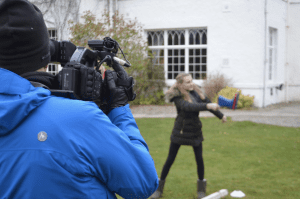 Because the Highland Games are team oriented and can be as competitive as you’d like, this activity is great for families who are visiting the Highlands. Boots n Paddles have various locations all over Scotland, so setting up a day filled with Highland Games is made easy! 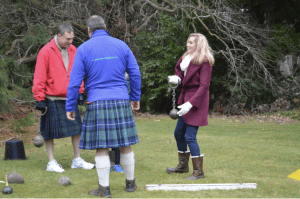 Another great activity in Scotland is shopping, specifically kilt shopping! 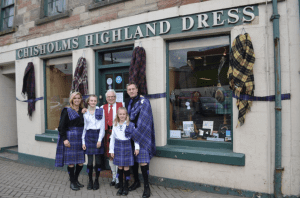 One of the biggest and most recognizable traditions in Scottish culture is the kilt! It was intriguing to see men dressed in this traditional outfit from the moment we stepped off the plane and all throughout the rest of our time in Scotland. Colleen and her family visited the famous Chisholms Highland Dress for a quick wardrobe change and to learn a bit more about the history of this Scottish tradition. 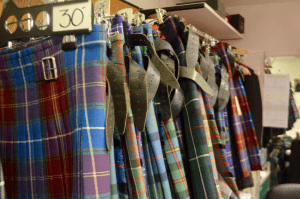 Although this practice has been around since the 18th century, kilts are still regularly worn by men and women today. Scotland is the only country in the world where men wear such national dress as part of their daily lives. While there is no punishment for wearing another clan’s tartan, most surnames have established associations with certain patterns and colors. The most important aspect of wearing a kilt is enjoying the special feeling of being part of a continuing and proud tradition of national dress. 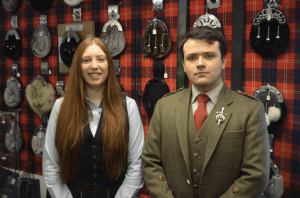 Generations of the Chisholm family have created a reputation that makes their Castle Street Inverness location the go-to for everyone’s traditional Highland dress needs. Chisholm kilts for men, women, and children are individually hand-tailored. They carry everything from kilt jackets, to sporrans, to brooches, and even daggers. If you aren’t sure if you’re associated with a specific tartan, Chisholms carries a large range of district, Irish, Canadian, and general Scottish tartans to choose from. 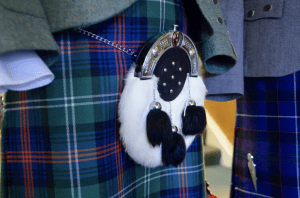 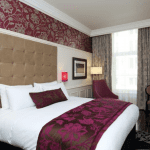 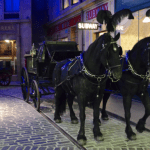