Take Me Out to the Wahoos!

If your family enjoys a good ball game, then you are going to love taking in 9 innings with the Pensacola Blue Wahoos, the Double A affiliate of the Cincinnati Reds. The Bayfront Stadium is GORGEOUS and overlooks the Pensacola Bay, setting the mood for a fun experience. There is an energetic vibe throughout the park and it starts before you even get to your seats! One woman greeted us with huge Blue Wahoos stickers and taught us how to howl like a true Wahoos fan! Then we met Stewart Roberts, an ambassador of the community relations team, who clearly has a passion for baseball and particularly the Wahoos spirit. There are tons of activities for the kids, gourmet food offerings, autograph signings with the players and hugs from the team mascot, Kazoo.

We had great seats right behind home plate where we could enjoy the game up close and personal. We were so close to all the action! We had the full baseball experience with hot dogs, French fries and other stadium snacks. My niece Heather joins us for most of our family travel shoots. My girls get to hang out with her while I do interviews that the girls don’t need to be part of. Heather gives me peace of mind and my daughters adore spending time with their cousin. Since my husband can’t travel with us for most of the shoots due to his work schedule, it is so nice to have her support on the road. Look for her in the show…it’s like a Where’s Waldo game!We had a special treat lined up for our very first night in Pensacola…my girls and I got to throw out the first pitch! How cool is that? It was our first time so we had to get advice from some of the Pensacola Blue Wahoos players. Before we headed out to the mound, the girls and I got the scoop on how to get the ball over the plate. Well, let’s just say, some of us were more successful than others and I was NOT one of the successful ones! Oh well…at least the girls followed the players’ advice!

While the kids enjoyed the baseball game, I got the chance to meet with the 2014 stadium chef, Chris Voorhees, to try some of the gourmet options on the menu including The Battleship, which he likened to a Po Boy on steroids complete with fried potato salad balls! That’s right, potato salad balls. And yes, they are the size of baseballs! There is a great dining space overlooking the stadium complete with a bar area, high top seating and heating lamps that kicked in as the sun started to set. It was a great spot to catch the game and enjoy some really good food! Check out an interview about The Battleship! The 2015 stadium chef is Travis Wilson…it will be fun to see what Chef Wilson comes up with to put on the menu for this season!

It was also a pleasure to meet Bruce Baldwin, CEO of the Blue Wahoos. Under his leadership, the Blue Wahoos sold out the first six games of their starting season. That’s pretty impressive considering there are over 5,000 seats! No wonder why Pensacola Bayfront Stadium was named Ballpark of the Year in 2012 by Baseballparks.com.

Between innings and during the commercial breaks, the Blue Wahoos organize some games on the field for the fans. My girls were selected to play the dizzy bat game! The instructions to play were 1) put your forehead on the bat, 2) run around the bat 10 times and 3) run as fast as you can across the finish line! Dunovan’s long legs got her across first this time, but Shea was pretty darn close!

A unique way to end the evening is to take a pedicab back to your parking spot or even possibly to your hotel! The locals told us this tip and guess what? The pedicab drivers don’t charge a fee…they only work for TIPS! So, if you want a green alternative of transportation and a fun end to the evening, check out the pedicab service offered by Gulf Coast Pedicabs.

Some Additional Tips & Fun Facts
• Bring a sweatshirt for evening games. When the sun goes down, it can get chilly.
• Gates for general admission open 60 minutes before the start of the game.
• The Blue Wahoos are part of the Southern League. With roots dating back to 1885, it is one of the oldest leagues in professional sports.
• Wahoo is a type of fish best known for its speed and high quality!
• Professional golfer, Bubba Watson, is part owner of the Blue Wahoos baseball team and is originally from nearby Bagdad, FL.
• Children under 2 are free since they can sit on your lap.
• Umbrella strollers are best since they can be folded and stowed under your seats.
• Sunday is family day! The kids can run the bases and can play catch on the field at the end of the game.
• Parking is available at a number of lots near the stadium. Here’s a map!
• Fireworks displays after the games on Saturday nights! 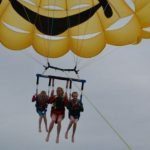 Parasailing in the Pensacola

Meet an Angel & So Much More! 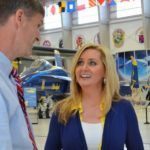